FORT SMITH – The implementation of solar power – with the expectation of cost savings – has spread to city and county facilities in the River Valley.

Greenwood held a groundbreaking ceremony on November 30 for the first of two solar power plants that will be used for municipal buildings. The facility is on city-owned property at 606 Jayhawker Lane and provides electricity to 98% of Greenwood’s government operations in the Arkansas Valley Electric Co-op service territory, according to the city. . This includes the Town’s Fire Hall 2, the Ed Wilkinson Community Lodge, and the Wastewater Treatment Plant and Office.

Mayor Doug Kinslow expressed hope that the second facility will be operational by the spring. This will supply the town hall, the police and fire departments and the water treatment plant, as well as the water, wastewater and street service stores in the service territory of Southwestern Electric Power Co ..

Tom Marsh, chief financial officer of Greenwood, said that the two factories combined are estimated to save the city more than $ 2 million over 30 years. Kinslow said the city will be able to reinvest that money in other things, in addition to reducing its carbon footprint.

“We don’t have a defined plan for said energy savings on the streets or anything like that, but obviously the less money you spend to pay utility bills, we have a lot more money to operate. “Kinslow said.

Hudson estimated that another solar power site – in an unincorporated rural area on Arkansas 22 near Lavaca – is nearing completion. It is slated to go into service on Jan.21 and supply county facilities – such as the Fort Smith courthouse and the County Courts building, in addition to county properties at Ben Geren Park – at Fort Smith under Oklahoma Gas. & Electric Co.

McKinstry, a Seattle-based company with an office in Little Rock, is managing this project, Hudson said. The company has guaranteed cumulative net savings of $ 444,906 to the county from the project over 20 years.

“By weighing the cost of the utility bills supporting all of our properties against the cost of implementing solar power and reducing those costs, even with the investment in solar equipment in the area. “Solar option, financially the county has taken the advantage by pursuing solar power,” said Hudson. “It was a way to help run the county government more efficiently.”

It comes after Clarksville and Alma have both developed solar power installations over the past two years in conjunction with outside companies.

Bill Halter, CEO of Little Rock-based Scenic Hill Solar, said the two solar power plants his company built for Clarksville Connected Utilities are among the largest of their kind in Arkansas. They also made Clarksville the first community in the state whose government operations were entirely solar powered.

These installations, one of 6.5 megawatts and another of 2.86 megawatts, were completed in 2017 and 2019 respectively, said Halter.

Alma hosted a “flip the switch” event in February for a solar panel to power the city’s wastewater treatment plant and a city-owned lift station. It was the first phase of a 28-year solar services agreement with Entegrity Energy Partners in Little Rock, according to Mayor Jerry Martin.

Martin said it is hoped that phase two of the project, a solar panel to power the rest of the city’s municipal buildings, will be operational by the third quarter of 2022. The project was designed to offset around 80 to 85. % of the municipality’s total electricity consumption.

Kinslow said the grand opening of the new Greenwood solar power plant took place on May 19. The city’s public-private partnership with Scenic Hill Solar to build two of these facilities was announced in January after the city signed a 30-year contract with the company the previous August.

Halter said Scenic Hill Solar will build, own and operate both facilities while selling power to the Town of Greenwood. The company is responsible for all costs of construction, operation and maintenance. The first project has an estimated value of approximately $ 1.5 million while that of the second project is approximately $ 400,000.

Greenwood’s only investment for this was around $ 40,000 for 10 acres to accommodate the first facility, Kinslow said. The second plant will be located on municipal property at 850, promenade Marymont.

Marsh said Scenic Hill Solar will supply power from the plants to the Arkansas Valley Electric Cooperative and the Southwestern Electric Power Co. in the form of kilowatt-hour credits. The kilowatt-hours the city uses through municipal buildings in the service territories of these two companies will get the credits against what Scenic Hill provided them.

“During the year, for the months where we have more net credit than we have used, we will only receive an administrative bill from Arkansas Valley and SWEPCO,” said Marsh. “We are not receiving a bill for the actual energy because it was supplied to them through Scenic Hill Solar, through our panels.”

The city’s agreement with Scenic Hill Solar gives the city the option to purchase both facilities after six years of operation, according to Marsh.

The two plants, which contain more than 2,300 combined solar modules, will produce more than 40.2 million kilowatt-hours of electricity over 30 years, according to a press release from the city. The electricity they will produce will meet half of the electricity consumption for the city’s government operations.

Hudson said the Sebastian County solar power project with McKinstry was cleared in September 2019. The cost of the project is around $ 2.6 million. The county made a down payment of $ 600,000 on one of its reserve accounts and funded the remaining balance of about $ 1.9 million over 20 years.

The county’s two solar installations will have more than 4,000 combined solar modules, according to specifications provided by Hudson.

However, Sebastian County’s solar power systems are owned by the county, Hudson said.

A solar power plant is seen on Wednesday, December 22, 2021 in Greenwood. Built by Little Rock-based Scenic Hill Solar on land owned by the Town of Greenwood, this 750 kW power plant is the first of two such installations that will provide electricity to buildings in the town. Visit nwaonline.com/211226Daily/ for today’s photo gallery. (NWA Democrat-Gazette / Hank Layton) 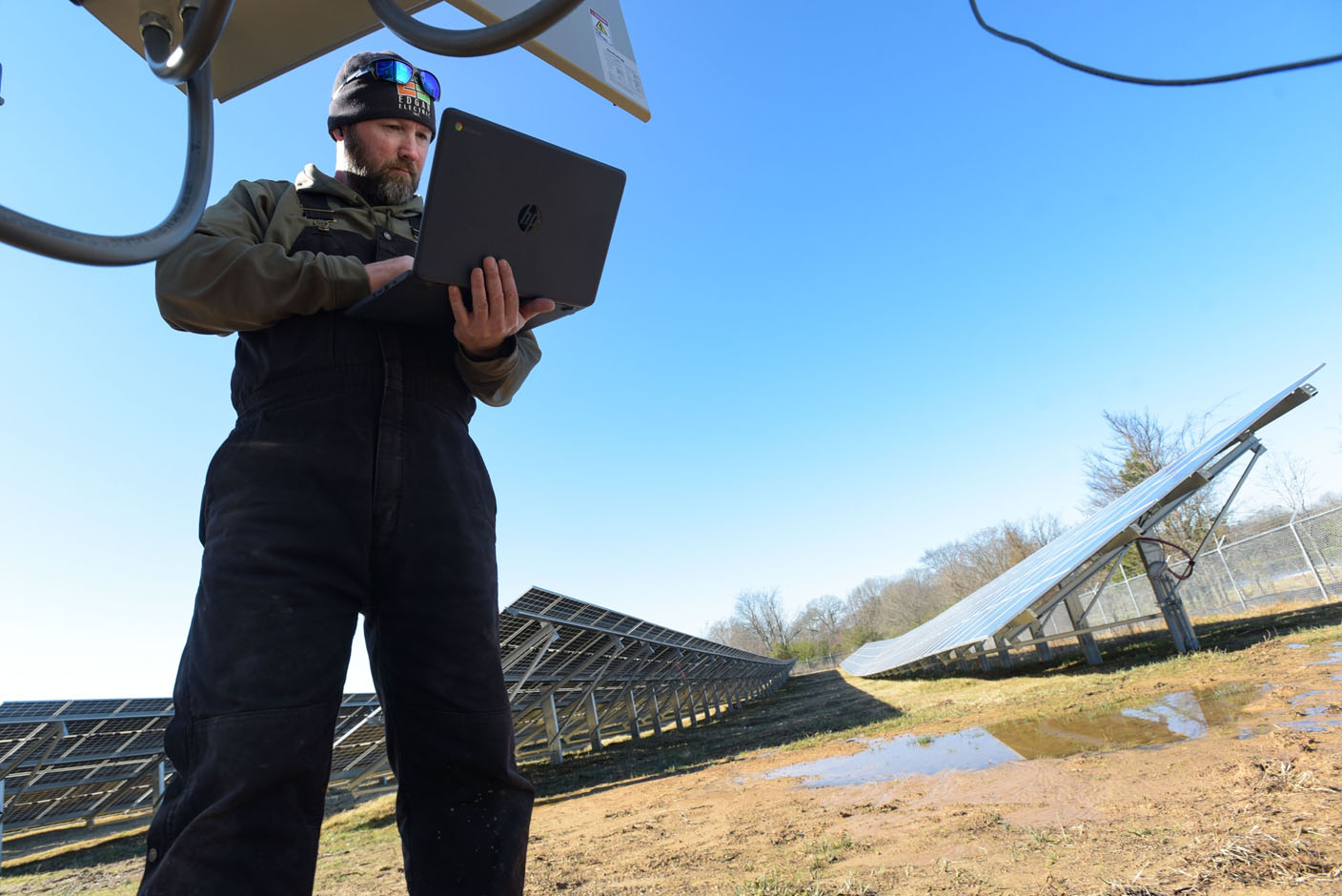 Chris Andrews, an electrician at Edgar Electric, works Wednesday, December 22, 2021 at a solar power plant in Greenwood. Built by Little Rock-based Scenic Hill Solar on land owned by the Town of Greenwood, the 750 kW power plant is the first of two such facilities that will provide electricity to buildings in the town. Visit nwaonline.com/211226Daily/ for today’s photo gallery. (NWA Democrat-Gazette / Hank Layton) 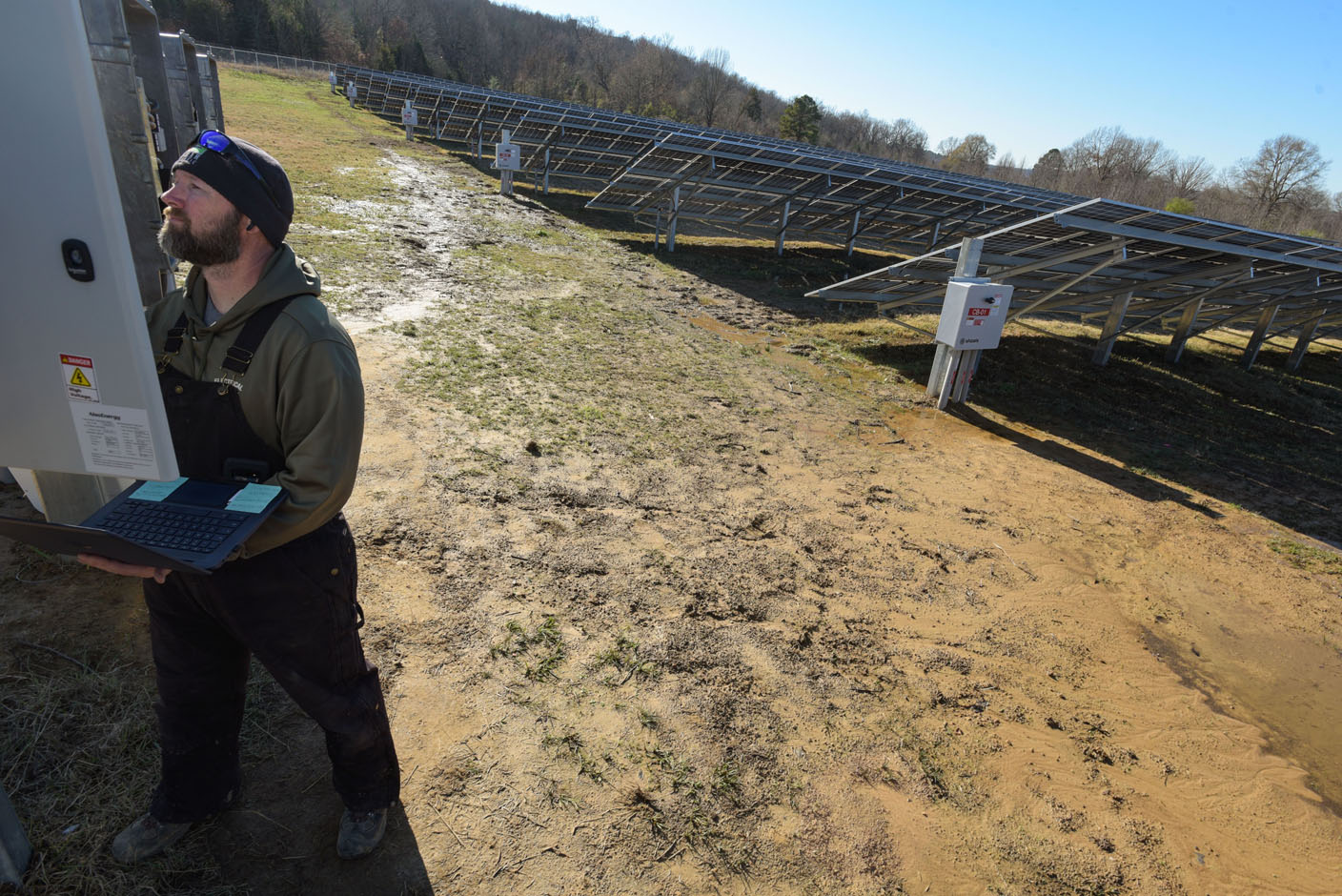 Chris Andrews, an electrician at Edgar Electric, works Wednesday, December 22, 2021 at a solar power plant in Greenwood. Built by Little Rock-based Scenic Hill Solar on land owned by the Town of Greenwood, the 750 kW power plant is the first of two such facilities that will provide electricity to buildings in the town. Visit nwaonline.com/211226Daily/ for today’s photo gallery. (NWA Democrat-Gazette / Hank Layton)

Sources: City of Greenwood and County of Sebastian